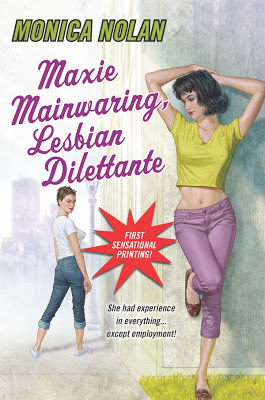 
-Congratulations on your new book, Monica!  Now tell us, who is this person, Maxie Mainwaring?


-Maxie Mainwaring appeared in my first book, Lois Lenz, Lesbian Secretary, as a supporting character, and she gets her own story in this book. She is the wild, reckless daughter of a high society family. Her mother doesn't approve of her living in the Magdalena Arms boarding house and working as a newspaper columnist's assistant, and has been trying to marry her off. The book opens when her mother catches her kissing another girl and cuts off Maxie's allowance. So Maxie has to learn how to support herself. Naturally there are many, many complications, as Maxie lands and loses a whole series of jobs.

-What made you write this book? Have you met a lot of rich girls who never had a job?


-I always knew I wanted to write another book about the girls at the Magdalena Arms in general and Maxie in particular. While I had a few wealthy girls in mind (the ones I knew worked and were much less frivolous), a lot of the inspiration for this story was my own work experience. In a way it is a wish-fulfillment fantasy about a person who has a lot of different jobs and gets bored easily, and quits or is fired, and comes out on top. After two much more hard-working protagonists, it was fun to write about one who has a less-than-ideal work ethic. Let's face it, working for a living isn't fun, and Maxie doesn't pretend it is. Maxie shares my preference for sleeping in and having breakfast in bed rather than getting up for a nine-to-five job. Maxie's love life, however, which mirrors her work life in its variety, is not in the least autobiographical! That is pure pulp.

-There is always a mix of intriguing persons in your books! And they often have a name that matches their personality. How do you come up with your characters?


-It's hard to describe the process of inventing characters. They're made of bits and pieces from all over--movies, people I know, strangers on the street, stories I've heard, books--then they somehow come together in my subconscious. And of course, they're often shaped by plot necessities! The names, on the other hand, are more consciously chosen. I use different sources, for example, my college alumnae newsletter. I'll look at the class notes from the 1950s and 1960s and make lists of names I like. Then I'll recombine or change them. Mrs. DeWitt is a twist on the DeForests in Daphne Du Maurier's Rebecca, because I had in mind a sort of fallen grandeur feeling. Mainwaring just sounded rich and waspy (White Anglo Saxon Protestant, not the bug) to me--there's a character in a Jane Austen novel named Mainwaring. Then in this book it turns out that Maxie's ancestors are from Finland and her grandfather anglicized their name which was originally Mänvaarik. Which brings me to the Scandinavian connection...

-Yes, I heard that there would be some scandinavian references in this book! Of what kind?


-A little background: I grew up in Chicago which at one time had a big Swedish population, and still has a sort of Swedish neighborhood with a Swedish-American museum and some Swedish restaurants, where I was taken as a child. Since Bay City is set in the midwest, and based in part on Chicago, I wanted to have that immigrant population as a presence in the books, which is partly why I made up the Daughters of the American Pioneers in my last book, Bobby Blanchard, Lesbian Gym Teacher.


The other reason is to poke fun at certain Americans' pride in having ancestry that traces back to the pilgrims. The DAP (Daughters of the American Pioneers) is a parody of the DAR (Daughters of the American Revolution) for example. Really I'm poking fun at the whole artificial construction of high society and aristocracy, etc. I'm proud of my ancestors who fled the potatoe famine in Ireland (smart!), and also the ones who left Germany for reasons I don't know, but I don't think I would join an organization to say that because of them I am more special than other people whose ancestors got here a earlier or later and came from a different place. We are all just immigrants in the end, and the first ones here gave the indians smallpox, which is nothing to be proud of.


Then I decided Bay City should be a place dominated by immigrants from Scandinavia, so I made Bay City's criminal underworld Scandinavian. So now Swedes and Finns and Norwegians (nobody from Iceland or Greenland, sorry) have been substituted for both waspy DAR types and the Italian mafia, and Maxie has to battle the Swenson, Larson and Olssen mobs. One of the reasons I did this is because there are so many cliches about the mafia, and they have figured in so many crime novels, and movies and television shows that they are old and tired and I needed to do something different with my mobsters. I think American readers will find it comic because of cultural expectations and stereotypes about Italians vs. Scandinavians--I'll be curious to see how it works for European and Scandinavian readers!

-Which is a favorite character in all of your books?


-Favorite character--Oh that's so hard to choose! I really love them all, even the party-poopers and villains. Especially the villains! Right now I'd have to say Maxie. I used to be very fond of Mrs. Pierson, the mean boss in Lois Lenz (her treatment of Lois was inspired by the way my older sisters treated me when I was a kid, so I'm sentimental about her). I like the girls with criminal tendencies like the never-seen Ramona in Lois Lenz, who reappears as Mona in Bobby Blanchard. I didn't manage to work her into Maxie, but she comes back again in the book I'm currently working on. I'm also very fond of Miss Craybill, the headmistress in Bobby Blanchard, because writing about her reawakened my childhood interest in birdwatching, now a real hobby of mine. I saw an owl in Golden Gate Park just last week, which was very exciting.

-Thank you, Monica! We´ll let you get back to your writing then. What are you working on?


- Now I must go work on book #4, Dolly Dingle, Lesbian Landlady, which should be out in time for Christmas, 2014!