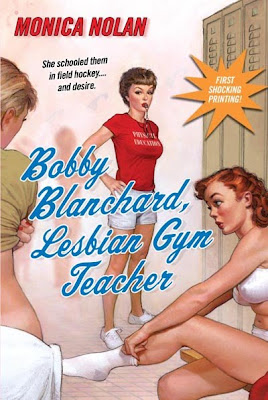 -Hi Monica! What are you doing right now?

-Right now I'm preparing to start an online zine called "Serial Teens and Predatory Lesbians" or something like that. I will write about two things I love: lesbian pulps and books from the 1950s that were written for teenaged girls - for example, "A Date for Marcie", "Katie and her Camera", "Beany and the Beckoning Road." I feel lucky because the San Francisco Public Library has a huge collection of rare lesbian pulps, so this writing project is partly an excuse to visit the library and read those books.

-Will there be more books like "Loiz Lenz, lesbian secretary" and "Lesbian Horse stories"?

-My next book is coming out in May, 2010. It is called "Bobby Blanchard, Lesbian Gym Teacher" and it takes place at a girls boarding school. Some of the characters from "Lois Lenz" make brief appearances.

I plan to return to Bay City and the Magdalena Arms for my next book, which I've just begun thinking about.

-If you were one of the characters in Loiz Lenz, which one would it be?

-If I was one of the characters in "Lois Lenz" I would be either Maxie Mainwaring or Mrs. Pierson. I would then have no money worries and a beautiful apartment.

-Do you have a favourite lesbian movie?

-Hmmm, favorite lesbian movie is hard. I see a lot but there aren't many I think are very good. I liked "High Art" but it was so sad. "Novembermund" ditto. "Costa Brava" was good; I love the documentary "Forbidden Love." "Olivia" is a good period movie. "The Legend of Fong Sai-yuk" isn't quite lesbian, but it's awfully fun. "Times Square," ditto. I have a soft spot for "Personal Best" and "Desert of the Heart" because I watched those when I was coming out. I think there are many good short films, but they are both too numerous to mention and probably too difficult for your readers to find.

-Which is your favourite lesbian book?

I have to say the same about lesbian literature, more bad books out there than good, although that is changing. And I should say I enjoy the cheesey books in their own way (I'm not sure how you would translate cheesey--to me it means sort of tacky, tasteless, over the top - like the movie "Diary of a Teenaged Hitch-hiker" would be an example of something cheesey but enjoyable). I like Sarah Schulman's "Girls, Visions, and Everything" and also her mystery "After Delores." I love Mabel Maney's books. I liked Barbara Wilson's "Gaudy Afternoon" (also a not-very good movie).
I love Patricia Highsmith, a lesbian author who usually wrote straight thrillers. She wrote "The Price of Salt" a lesbian pulp under a pseudonym at the beginning of her career, and two books with lesbian characters towards the end of her life: "The Small G" and "Found in the Street." Marijane Meaker, who wrote pulps under various pseudonyms and later wrote children's fiction wrote a memoir about her affair with Patricia Highsmith called, "Highsmith, a romance of the 1950s." There are many more, but then this would turn into a huge online catalog, so I will stop there.
PS: I somehow forgot to mention Sarah Waters, an author I really enjoy, particularly her book "Night Watch."
.
Upplagd av Fem flator kl. 20:44

This was a very enjoyable interview, thanks 5 flator and Nolan!